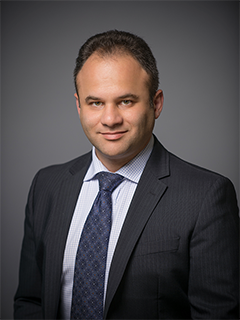 Mr. Sauchik is a highly experienced attorney practicing in the areas of healthcare and pharmacy law, commercial litigation, and corporate and business law.

Mr. Sauchik represents medical and pharmacy providers and other business clients in a wide range of transactional and administrative matters, such as mergers and acquisitions, business arrangements in the heavily-regulated environment, reimbursement issues, compliance, audit defense, and governmental investigations. He has particular experience representing specialty pharmacies.  Drawing on his in-depth knowledge of the industry and many years of experience advising healthcare clients, Mr. Sauchik delivers sophisticated, cost-efficient and relevant guidance on compex issues facing medical and pharmacy providers.  Mr. Sauchik serves as the lead attorney in many business and financial transactions involving medical, pharmacy, and other healthcare providers.  Mr. Sauchik's guidance has allowed numerous clients to prevail in matters involving healthcare audits and investigations.

Mr. Sauchik is also a highly accomplished commercial litigator who has represented clients in hundreds of cases throughout the United States.  Litigating on behalf of healthcare providers and other business clients, Mr. Sauchik leverages his deep understanding of the relevant business environment, combined with his exemplary litigation skills, to bring even the most complex disputes to successful conclusion.  In addition to many matters involving healthcare clients, Mr. Sauchik's notable engagements include representing an international bank in a case in the United States District Court for the Southern District of New York, in which more than 3,000 plaintiffs sought some $250 million in damages in what they described as the largest civil Internet fraud case ever brought.  Other engagements of interest include representing international movie studios in copyright infringement matters in the Eastern District of New York and before the Second Circuit Court of Appeals, defending a major import/export operator in a multi-million dollar dispute with a supplier; a case involving an international steel distributor in a products liability dispute in Texas and New York, a Civil RICO action involving one of the largest PEO in the USA, a dispute between a major European private bank and Sberbank of Russia, and many other notable matters.

Mr. Sauchik is a member of the Health Law Committee of the New York City Bar Association.  He is also a member of several professional organizations, including the American College of Healthcare Executives, the American Health Lawyers Association, and New York State Bar Association. Mr. Sauchik is a frequent lecturer and author of publications on issues of concern to clients in the healthcare industry.  Mr. Sauchik has been named to the SuperLawyers Rising Stars List several years in the row as well as to the Avvo Top Lawyers list.